The Northern Lights, a must-see for photographers and travelers. Nowadays, this phenomenon, with its truly amazing, dancing color schemes is on many travelers’ bucket list. And if you’re willing to do some research, the trip is even affordable. The Northern Lights may be seen in many different places, it has even been seen all the way down in Singapore (!), yet your best bet is a northern country. However, you absolutely need a clear sky. Just like sunlight, the Northern Lights can be blocked by clouds.

The Norwegian town Tromsø is the self-proclaimed ‘Northern Lights Capital’ and is also an ideal starting point for Northern Lights tours. In addition, Tromsø has a breathtaking location near various fjords, it’s still Norway, after all! Hence, we opted for Tromsø as the destination for our Northern Lights adventure. In many ways, our trip was different from what we had expected, planned and hoped. The Northern Lights are a natural phenomenon and Mother Nature also has her bad moods. While we were in Tromsø, a whole train of low pressure areas visited the region, reducing the chance of a clear sky to a minimum. We did get a huge amount of snow; snowfall was almost uninterrupted with a few blizzards hitting the Norwegian coasts every now and then.

Effectively there was only one evening with reasonable conditions to see the Northern Lights and for this we had to drive to the Finnish town of Kilpisjärvi, roughly three-and-a-half hour from Tromsø. According to the weather forecast, that location would have a reasonable chance on a clear sky. A reasonable chance, not more. However, when left between a choice of 0% and a reasonable chance, taking the reasonable chance is a real no-brainer. On our way to Kilpisjärvi it kept on snowing constantly, even just a few miles before the border between Norway and Finland. After we crossed the border it stopped snowing and a bit later stars were twinkling in the sky. Just south of Kilpisjärvi there’s a lake, which is also the border with Sweden, and we stopped near the lake to check the sky. The sky was dotted with stars, the minimum condition to see the Northern Lights, and there wasn’t a single cloud to be seen.

We headed to the lake in the icy cold. That’s easier said than done; once we got off the road it became clear how much snow had been gathered here the past weeks and months. In some spots the snow was knee-deep. Long live our thermosuits though! Thermosuits make you look like you swallowed a bunch of tires, however they allow you to make the weirdest movements in the snow. After ploughing through the snow and bushes we ended up in a wide-open space, Kilpisjärvi Lake. It’s pitch dark and we can see thousands, ten thousands, hundreds of thousands stars shining above us. We have a fantastic view on the Milky Way and I finally understand why it’s called like that as between all the stars you can see a kind of milky color. We are surrounded by silence. Really, the only thing that you should do is lie down in your thermosuit and just admire the twinkling sky. 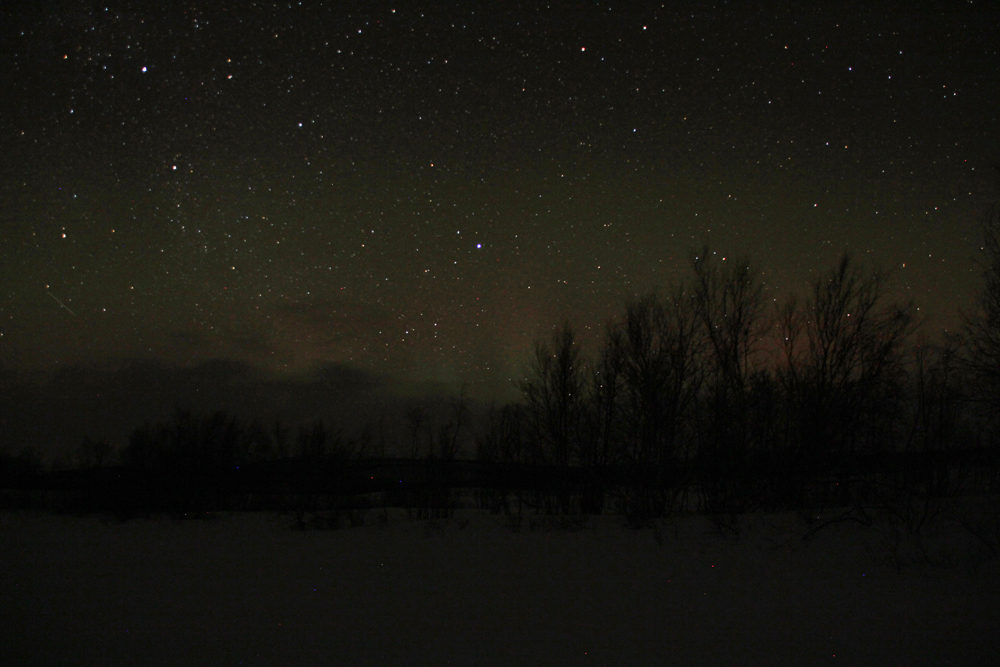 My blog will contain short articles about language(s), photography or traveling. Your responses are very much appreciated, yet I do ask you to respond in a decent manner, also if I don't agree with what I have written. Responses containing bad words or express other inappropriate behavior will be deleted at once.